ATTENTION: Postponed Due to COVID-19 Until Further Notice 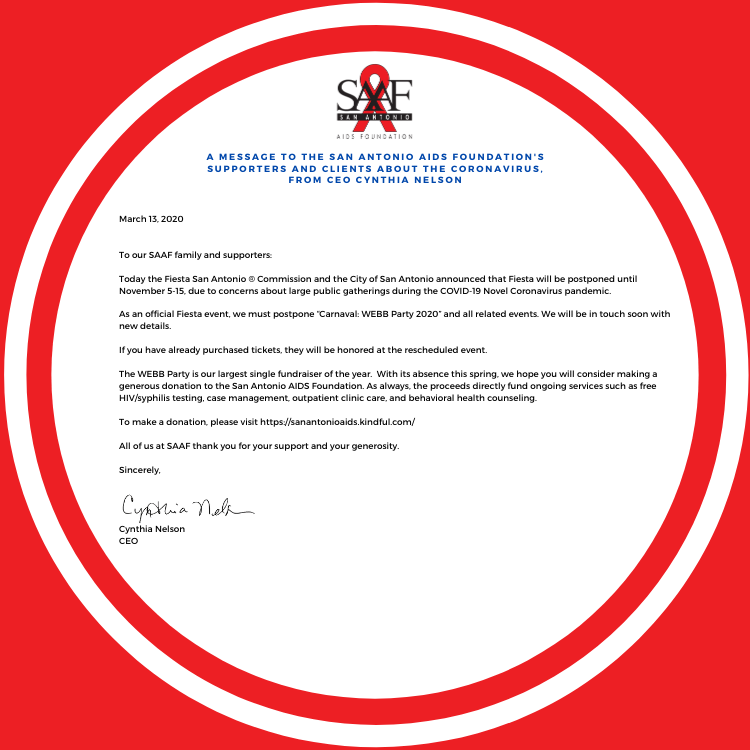 The San Antonio AIDS Foundation (SAAF) hosted the first Texas community screening of “Desert Migration,” an award-winning documentary about the unique challenges faced by long-term survivors of HIV/AIDS, from 6:30-9:30 p.m., Thursday, June 23, at the Santikos Bijou Cinema Bistro at Wonderland of the Americas Mall, 4522 Fredericksburg Road. Proceeds benefited SAAF and the local screening is timed to coincide with the 35th anniversary of the first official AIDS diagnoses in the United States. “Desert Migration” focuses on a group of gay men, all long-term HIV survivors, who sought refuge in Southern California’s Palm Springs. The film explores the physical, medical and emotional side effects of living with HIV – as well as the stigma that still exists in American society 35 years after AIDS was officially recognized as an epidemic in the United States and around the world.

First in Hope, First in Service: 30th Year of Service, Luncheon and Auction

From first-class silent and live auctions to the deeply moving keynote address by acclaimed AIDS and human rights activist Cleve Jones, “First in Hope, First in Service” reflected on the substantial impact SAAF has had on the health and welfare of the San Antonio community over the past three decades – and it was a chance to share our plans for the future as we work toward our ultimate goal of creating a city free of HIV. We were deeply honored that Mr. Jones agreed to be our keynote speaker. His work to fight HIV and AIDS, to end stigma and to demand the equal rights of LGBT people across our country is legendary. We are proud that he will be a part of our 30th anniversary and that he will share his experiences and insights with us as we continue our own fight against HIV and AIDS here in San Antonio.